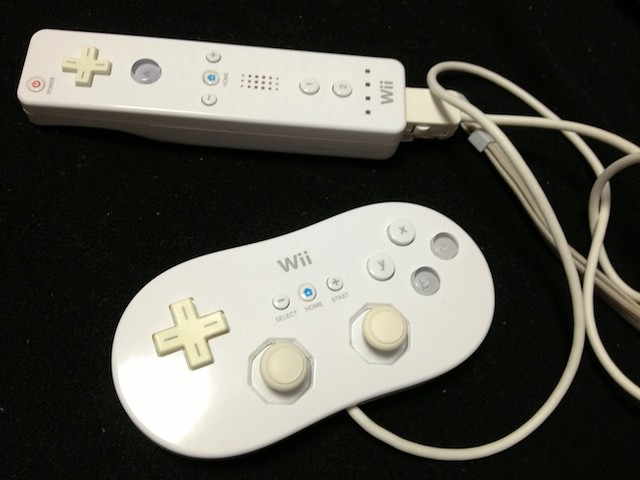 
Even amidst tough competition from iPhone , Playstation4, and XBOX One, Nintendo remains a big player in the video game market. Many kids dream about entering Nintendo, so naturally the competition to work there is very stiff. I was one of them, so in 2010 I entered the legion of fresh graduate applicants and went through their selection process. If you're curious on the process, read on (SPOILER: I didn't get hired). Without a doubt, Nintendo’s process is the most unique experience I ever experienced out of all the companies. Still curious? Here’s the complete steps Nintendo’s recruitment system for college fresh-graduates:

I signed up through their recruitment page (https://www.nintendo.co.jp/jobs/recruit/index.html). Applicants are given an account and application number to their internal recruitment system, and from there you signup for the various events that follows.

First thing you signup for is their company seminar. It's held several times both in Tokyo and Osaka. While not a requirement, rumor has it that you get 'points' for participating, so people generally go. Also, no one is rejected at this level yet, so the spots are quickly filled. I show up to the event hall at Osaka, and there are close to a thousand people there, all dressed in cookie-cutter "recruit suits". Ushered by a staff, I grab a seat inside the huge hall. Here's what happened when I went:


TIP on "company seminars": every time you're given some form to fill in, ALWAYS fill it in and return it, even if they say it's optional.

TIP on "group discussions": always ask something within the time slot. Keep the conversation going naturally, but don't hog the spotlight. You want to be remembered and noted, but not as the guy/girl that wont shut up. 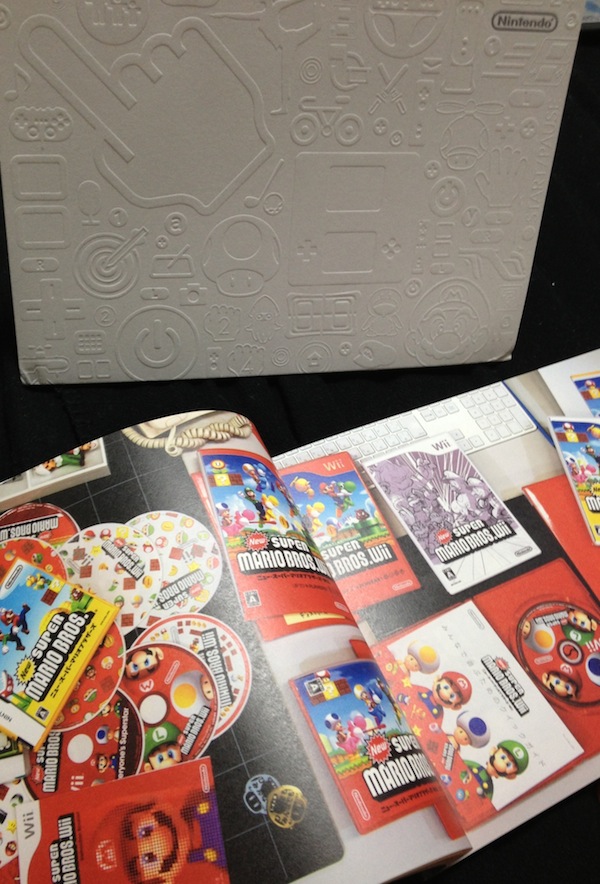 I got a cool book filled with photos of the employees' desks and interviews.

Through the recruitment page, I download a 2-page pdf which has to be hand-written (!) and snail-mailed (!) by a certain date. Out of all the companies that I have dealt with, Nintendo is the ONLY ONE still insisting on a mailed, hand-written application form. In my opinion, this is what separates the serious applicants from the wannabes. Even for Japanese natives, uncertain and flaky applicants would be weeded out by this requirement. Fast-forward later, after a week of writing and editing plus one whole day dedicated to just writing it cleanly on the form (I mess up writing kanji a lot, so had to rewrite the whole page many times), I sent my application in and hoped for the best.

TIP on "entry sheets": ALWAYS triple check everything with as many people as you can. And try to send it sooner, rather than close to the deadline. 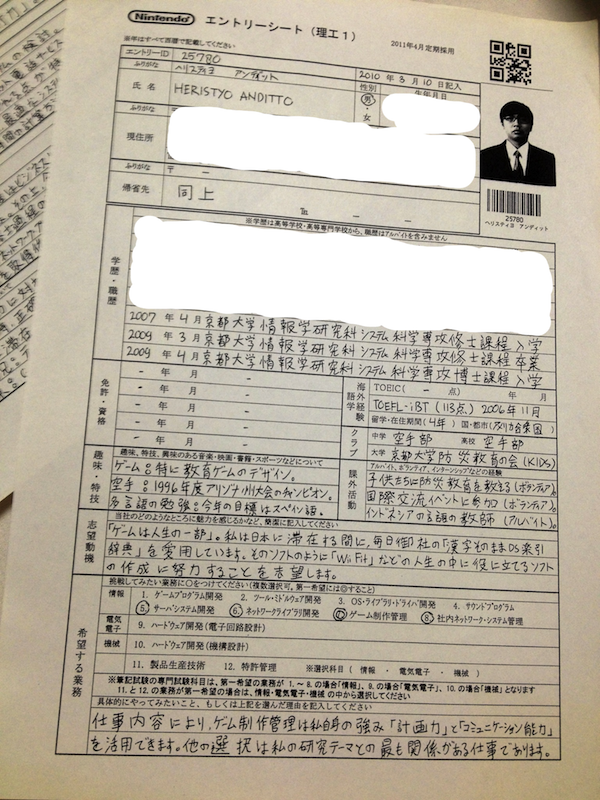 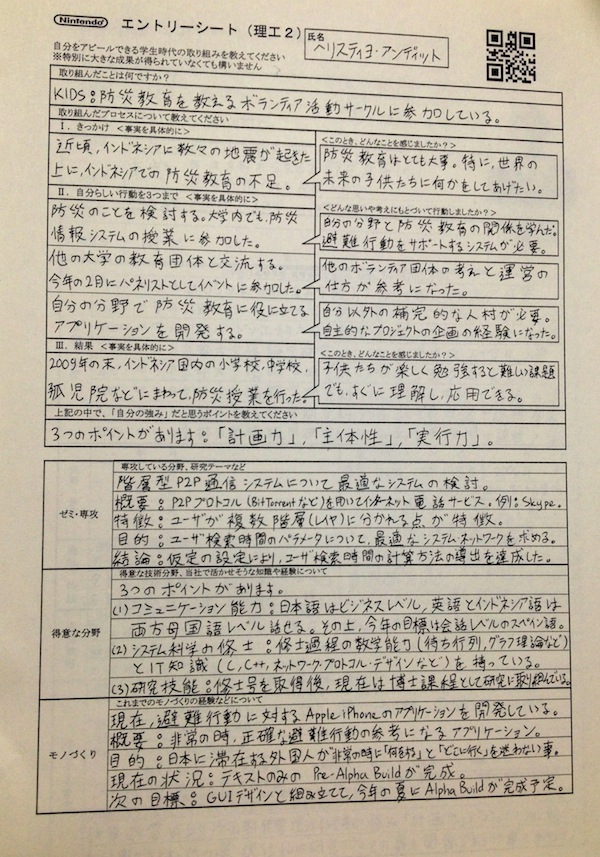 If you're curious what my application looks like, here it is.

To my surprise, my entry sheet passed and I'm instructed to take the online test. There are 3 subjects: Japanese, English, and Math, all of them multiple choice. Piece of cake, right? Nope. Out of all the online tests I've taken so far, for any Japanese company (and I've taken quite a lot), without a doubt Nintendo's online test is the most ridiculously, absurdly, hardest one. Here’s a brief explanation:

TIP on "web tests": in other companies, these tests are called SPI2 tests. Although, Nintendo has a highly specialized (and harder!) version of it.

By this point, I was sure I'd failed that brutal online test. I didn't have much hope, but shockingly Nintendo invited me to an on-site test. There were 2 options for the on-site test for engineering-type applicants: hardware engineer and software engineer. I don’t know what the tests are for non-engineering applicants, but I heard they focus a lot on language skills. Considering my background, I chose the 'Software Engineer' test. The tests were held at Tokyo and Kyoto. They also change the problems each time, to prevent leaking questions and answers. When I arrived at the test site, there were around 500 people taking it, with less than 80 taking the 'hardware' test. There were 3 main sections of the test:


And this unfortunately, ladies and gentlemen, is where my adventure ended. Luck may have pushed me through the previous stages, but it wasn't enough to pull me through to the end. From an unofficial site, notminshu.com, around only 1 in 8 pass the on-site tests. Taking account the number of tests, there are around 3000 people taking it (there were around 6 tests at about 500 people each), thus around 300 people passed. For the passing applicants, the following stages are interview rounds (taken from the Nintendo site and talking to actual employees):

Around 3 round of interviews follows, which are:


I hope this experience sheds some light behind the recruiting process for the powerhouse that is Nintendo. A peek into how the sausage is made, so to speak. I went farther than I expected in the process, but I was bitter when I found out I'd been rejected. Looking back now, I realize it has been one of the most interesting experiences I've had in Japan. If you're currently a student in Japan, I'd definitely recommend signing up if only for the experience. Who knows? You may end up working on the next Mario game or Wii machine?

Now, I've left out a lot of details in this post, so if you're truly interested in learning more, drop me a line (@anditto_h) if you're ever in Tokyo, and we'll grab coffee.